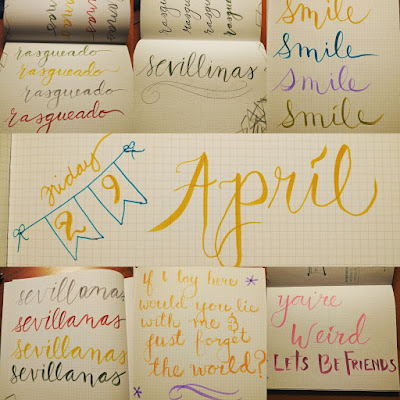 I've been playing around with my handwriting since I was 8 or 9. I would doodle my name in big bubble letters and dot my i's with hearts or stars. Yes, I was that girl. My 6th grade teacher had some calligraphy pens in his art supplies and I played around with those a bit. But in middle school...oh wait, it was called Jr. High back then, I stopped and just wrote for necessity, not so much for fun. My penmanship was still relatively neat, but aside from silly notes to friends and doodles in the margin, the creativity from my lettering was gone. But over the years, I'd flitter back to different calligraphy styles now and again. And this is one of those times. I'm having fun getting back into paying attention to pen strokes. I use brush markers, not a paint brush. I have, but there's more control with a marker. Turns out the favorite pen that most 'modern' calligraphers use are Tombow pens, ones I've used for card making for over 20 years. I haven't used them in a while, so I'm thrilled that they've found a new life in my new-again hobby.
_
via Instagram http://ift.tt/1TBCpkj
Posted by madretz at 1:40 AM

wow, you could make a career or a vital hobby out of coaching others in unleashing their creative energy. You could let them sample all your different ideas and mediums. I think people would pay just to hang out with you :)